Teachers frequently use interesting, exciting, and hilarious media clips as icebreakers to grab students’ attention and introduce them to classroom topics. Over the years, Saturday Night Live has produced a number of sketches connected to the subject of communication. Sometimes the sketches speak explicitly about specific communication strategies or genres, while at other times they provide a fun example of what not to do if you want to be an effective communicator. This post contains links to just a few SNL sketches that Writing and Communication instructors can use as icebreakers in their courses. 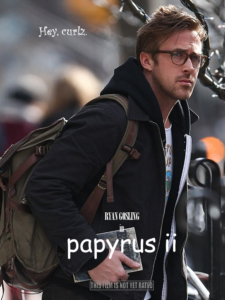 “Papyrus”: In this intense parody trailer, Ryan Gosling plays a man haunted by one designer’s font choice when he created the logo for James Cameron’s 2009 film Avatar.

“PowerPoint”: Mikey Day and Idris Elba team up as Microsoft tech experts running a PowerPoint workshop. Hilarity and anxiety ensue as some of the people in the workshop struggle to create a set of simple slides. A few of these same cast members/characters later come together for another hysterical sketch called “Zoom Call,” in which they parody many of the behaviors that have become commonplace–and even cliché–in teleconferencing.

“Dorm Room Posters”: One college student (Pete Davidson) is struggling to write his history paper. The posters in his dorm room come to life in order to give him advice on how to write an academic paper, but only most of them are helpful.

“The War in Words: William and Lydia”: Mikey Day and Phoebe Waller-Bridge parody the documentary genre as communication breaks down in this amusing exchange of letters between a WWII soldier and his wife. Day also does a similar sketch as a WWI soldier writing to his wife (played by Claire Foy) with similar communication mishaps.

“Why’d You Post That?”: Kevin Hart stars in new game show in which he yells at contestants for their inept use of social media.

“Down by the River”: A classic sketch involving Chris Farley as motivational speaker Matt Foley, whose awkward presentation convinces two teenagers to change their lives.

“Substitute Teacher”: A substitute teacher (played by Lin-Manuel Miranda) relies on Hollywood tropes and pop culture to try to inspire a skeptical AP English class to love literature. Years earlier, in 1996, the SNL cast had done a “Substitute Teacher” sketch called “Suel Forrester: Substitute Teacher,” in which nearly everyone in a classroom of high school students (Will Ferrell, Cheri Oteri, Molly Shannon, and others) have no idea what their substitute teacher (played by Chris Kattan) is trying to tell them. Teachers, please, slow down and annunciate.

Intonation is a powerful indicator of meaning. In this sketch, “Sarcasm 101,” Matthew Perry essentially teaches an entire class about using tone to to say one thing and mean another.