While traipsing across the internet last week, I stumbled upon an addictive little YouTube channel called Great Big Story. Forgive me, I might be late to this party, but if you’ve never heard of it, up until five months ago, Great Big Story was, as their About page on YouTube puts it, “a global media company devoted to cinematic storytelling.”

The micro-documentaries produced by Great Big Story are informative, intriguing, and just plain brilliant, and the channel has such a range of topics that you are bound to find something you love. Some of my favorites include “Enter the Deadliest Garden in the World,” “Why Sweden Loves Food in Tubes,” and “Why the World’s Mathematicians Are Hoarding Chalk.” I am currently considering the possibility of having my composition students make micro-documentaries for my class in the fall; this channel would be a wonderful resource for readings and examples of the genre.

Because we are inherently interested in language, communication, and culture here on this site, I wanted to provide a list of potential episodes that are interesting and relevant to our mission, interests, and target audiences. Happy watching!

“How the Language From the Sims Was Created”

“This Man Can Pronounce Every Word in the Dictionary”

“The Surprising Science Behind the Word ‘Pokémon’”

“This Dialect Coach Can Transport You With Her Perfect Accents”

“Giving Artists With Disabilities a Space to Thrive”

“The Artist Paints What She Hears”

“A Photographer’s Mission to Capture a New Image of Africa”

“The Largest Handwritten Family Tree in the World”

“A Travel Writer Shares His Tips”

“The World’s Most Magnificent Libraries”

Rajkumari Hirani’s 3 Idiots (2009) is a Bollywood masala film in which the lead characters make their way through one of the prestigious colleges of the Indian Institutes of Technology (IIT). The film is unique in spotlighting mental health issues facing students at institutions of higher learning, even as it includes the usual trappings of buddy films, college humor, and romantic comedy. One of the major characters in the film (Raju) attempts suicide when he’s at the brink of being expelled from college, but eventually recovers. What makes the flick very relatable for a global audience is its candid discussion of the pressures weighing on college students. 3 Idiots did very well commercially in Southeast Asian markets, in addition to being a big hit in India. A very entertaining watch overall, the film stars notable Indian actors, such as Aamir Khan, Kareena Kapoor, and R. Madhavan.

At the heart of the film is a struggle between the romantic individual spirit (embodied in the everyday college student) and the mammoth of the modern educational system. Students like Raju and Farhan are trapped in a system that wants them to mechanistically master the art of acing written examinations, until they can be freshly minted as graduates. As with many students around the world, these characters’ dreams of upward social mobility are pinned to obtaining the prestigious college degree. As you watch the film, you want the characters to make it out with their spirit intact, without being crushed by the system. I like the idea that global audiences can relate with the film’s characters based on their own experiences with a similar system, cutting across several cultural differences. Parts of the film are shot in the scenic areas of Ladakh (including Pangong Lake) that are now administered by India’s union government.

Hirani’s films are prone to cringeworthy moments of misogyny, xenophobia, and homophobia. In 3 Idiots, the butt of the main characters’ jokes is a Uganda-born student of Indian origin (Chatur), who is presented as a deserving target for pranks because of his bad Hindi. While several of the pranks on Chatur come across as bullying, the cringe elements all come together in a scene where his speech in front of a college assembly is sabotaged by the film’s protagonist (Rancho). Chatur is a Hindi learner who often goes beyond his vocabulary by reading from a script (or consulting a dictionary), cuing Rancho to replace the words in his speech with unsavory jokes about sexual molestation. The film is adapted from Chetan Bhagat’s novel Five Point Someone (2004), which is thoroughly disliked by literary critics for its over-the-top drama and pandering to the audience. Bhagat has written a slew of novels about IIT that have been adapted into films since the success of 3 Idiots.

Perhaps I am biased because I love Aamir Khan’s work. I love Lagaan (2001), Taare Zameen Par (2007), Talaash (2012), and Dangal (2016), but watching Khan goof all over the set of 3 Idiots was such a joy for me. This film. Was. AWESOME! While Alok certainly has a point about the cringe elements of the film potentially crossing a line, it is also difficult not to appreciate the point being made through the character Chatur and his humiliation. The approval Chatur had received from university administrators and professors drives home the idea, though not seamlessly, that what the modern institution of higher learning seems to value is not free-thinking or trail-blazing, but instead regurgitated facts encased in jargon that create an effigy of knowledge rather than the real thing. In that way, the characterization of Chatur reminds me of T.S. Eliot’s line in Choruses from the Rock, “Where is the knowledge we have lost in information?”

If you like, you can think of 3 Idiots as being very much in the same vein as Dead Poets Society (1989), but with better singing and dancing and more laughs. (No disrespect to Robin Williams, of course.) Such a comparison does betray that cinematically, yes, indeed, we’ve trod this ground before, but nevertheless 3 Idiots remains a super fun/funny and sometimes emotional film despite its flaws, as well as an important one for people like Alok, me, and our colleagues who teach at a STEM school. 3 Idiots is on Amazon Prime, but luckily you can also find it on YouTube. A big thanks to the two students who recommended the film to me in the first place.

As a bonus for our fellow writing and communication teachers out there, I just want to share one of my favorite clips from 3 Idiots. Find a way to use this clip in any presentation that involves science communication, pitching your work to the public, jargon/disciplinary language, grant writing, and academic writing, etc. Trust me. It will make your point, and it will leave an impression. 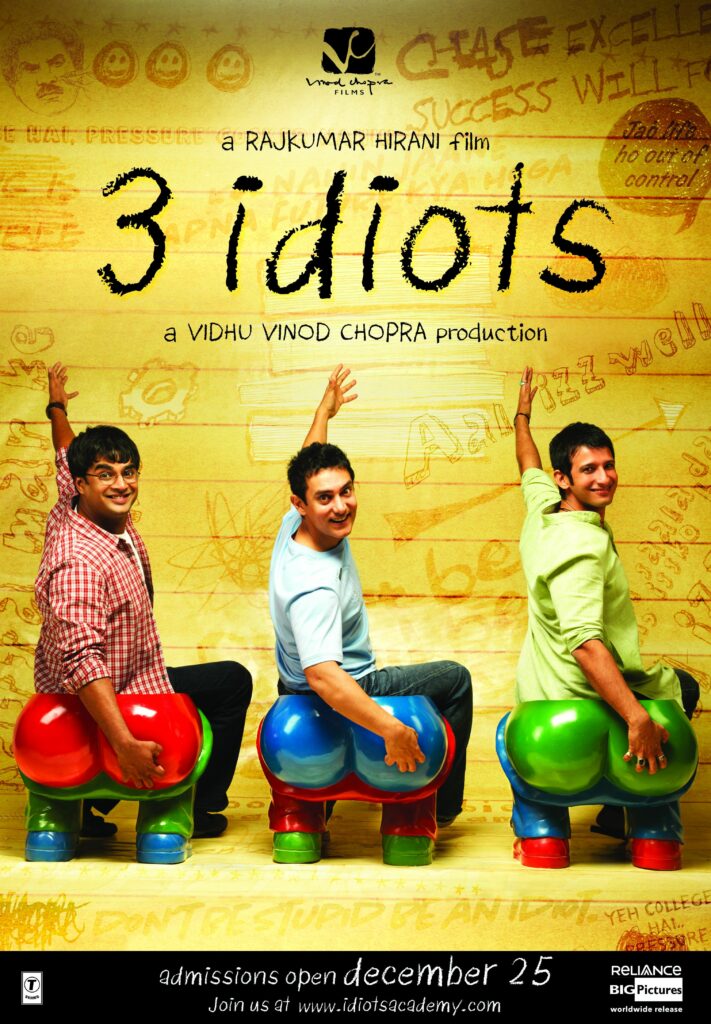