For the World Englishes Committee, this academic year has been a strange one, as it has been for pretty much everyone we know. Yet, in spite of the circumstances of a time in which it is easy to feel like we are hunkering down and waiting for a storm to pass, our committee has continued to be as active as ever in its mission of serving and advocating for the interests of multilingual and international students and supporting their instructors. As a result of the work accomplished by our committee chair, Kendra Slayton, as well as committee members Alok Amatya, Anu Thapa, Eric Lewis, and me (Jeff Howard), the World Englishes Committee has managed to advance multiple projects, both online and on the Georgia Tech campus. The following is a summary of what we have accomplished this year: 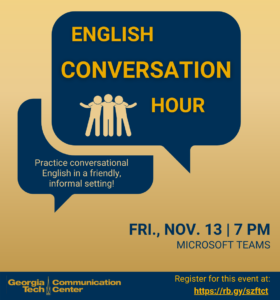 a) The World Englishes Committee has helped to organize and sponsor six virtual Conversation Hour events in partnership with the Naugle CommLab and the Georgia Tech International Ambassador program (GTIA). Intended for students who want to practice their conversational English in a friendly and supportive environment, these events were attended by numerous undergraduate and graduate students currently enrolled at Georgia Tech.

b) Members of the committee have also published interviews with scholars and specialists whose research and teaching relate closely to what this site is all about. These interviews include Dr. Robert Griffin (interviewed by Kendra Slayton) and Dr. Ahmar Mahboob (interviewed by me).

c) Multiple members of our committee–Alok Amatya, Kendra Slayton, and me–helped compose the Writing and Communication Program’s application for the 2020 Georgia Tech Unit Diversity Champion Award, which the program received in Fall 2020.

d) In the Spring 2021 Semester, the committee began a recurring segment on our blog called World Cinema Spotlights. This segment was inspired by film scholar Anu Thapa, and we have published spotlights of the Bollywood film 3 Idiots (written by Alok Amatya and me) and the animated Japanese film The Tale of Princess Kaguya (written by Eric Lewis and Kendra Slayton). We plan to continue publishing such spotlights for the foreseeable future. 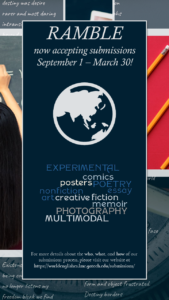 e) Finally, our capstone of the year was the publication of the second issue of RAMBLE, our committee’s literary magazine. In this year’s issue, we were honored to publish multimodal creative work composed by a number of multilingual and international graduate and undergraduate Georgia Tech students. The magazine was even more robust than last year’s issue, and we are excited to witness and facilitate this growth. RAMBLE, issue 1, was also featured in the Academic Program Review self-study of Georgia Tech’s School of Literature, Media, and Communication as evidence of the quality of work our students are doing, while also demonstrating one of the multiple ways in which our school is seeking to support the work of diversity on our campus.

After what has been an extraordinarily productive and unique academic year, I must announce that our committee will be taking a break from the blog for the summer, but we will return in September, probably with some new faces and of course new ideas. We would also like you to know (if you don’t already) that our committee has begun developing our social media presence, so please feel free to follow us on Twitter. Our handle is @GTworldengs. Thank you for reading and have a great summer!