Nezhukumatathil, Aimee. World of Wonders: In Praise of Fireflies, Whale Sharks, and Other Astonishments. Milkweed, 2020. 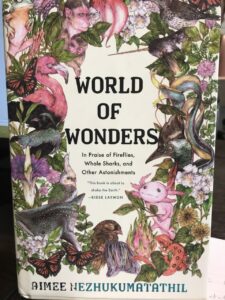 Aimee Nezhukumatathil’s inspired collection of essays is a marvelous blending of natural history and personal experience. The author stitches together diverse descriptions of animals and people, including herself and her family, so seamlessly that a reader cannot help but appreciate how interconnected the lives of Earth’s flora and fauna are. Nezhukumatathil plumbs the depths of the oceans to inquire into the lives of vampire squid and octopi, narwhals and ribbon eels; she explores the monsoons and bonnet macaques of India; she ponders on touch-me-nots and corpse flowers and wanders among butterflies and fireflies. In the process, she identifies the links that bind us all in a common destiny, laying out the current and future impact of human (mis)behavior and the obligations human beings possess toward their fellow organisms.

As a father of little sons who prefer to watch BBC’s Planet Earth rather than cartoons and whose days begin with whale sharks and end with flamingos, I loved the tenderness in these essays applied as equally to the curiosities and range of Earth’s biodiversity as it is to descriptions of the author’s children. While reading the book, I frequently found myself reading it aloud, even sharing passages such as the following one with my boys during our bedtime rituals: “I know I will search for fireflies all the rest of my days, even though they dwindle a little bit more each year. I can’t help it. They blink on and off, a lime glow to the summer night air, as if to say: I am still here, you are still here, I am still here, you are still here, I am, you are, over and over again” (13). It is a rare book that compels me in this way. My sons peeked over my shoulder as I read, and each of them took turns gazing with love and fascination at the illustrations of each creature that marked the beginning of every new chapter. As I spoke to them of the vampire squid, its two flaps of skin and its eight tentacles (53), their attention was palpable. The moments I experienced with them made the reading this collection tangible, memorable, and meaningful.

While this book has an appeal that attracts even children as young as mine with its luciferin glow, it also carries a heaviness as it reflects on issues of gender, race, and the environment. Discussions of these issues are no less powerful because of their juxtaposition with descriptions of cactus wrens and grey cockatiels, but on the contrary their reach is amplified by the way Nezhukumatathils situates human diversity within the biodiversity of our planet. At first glance it seems in Nezhukumatathil’s work that human beings can find reflections of themselves in nature, but ultimately we must realize that nature doesn’t just reflect who we are; rather, it is who we are. Not separate from, but part of us.

The next time I teach creative nonfiction in my English 1101 courses, I entirely plan on teaching excerpts from this book, if not the whole thing. I recall that I once had a student who said I came off as obsessed with creative nonfiction, and I convinced myself that it was fine, that it was only one student’s perspective. When I teach this book, it won’t be just one student who suspects me of obsessing; it will be a whole roomful, and it will be glorious.