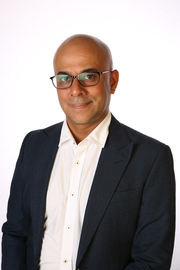 Dr. Ahmar Mahboob earned his PhD at Indiana University, Bloomington, in 2003. The title of his dissertation was: “Status of nonnative English speakers as ESL teachers in the United States.” [He] is keenly interested in the application of language sciences to developmental issues. His primary research interest is on an examination of policies, practices, and implications of language variation in local and global contexts. In pursuing this goal, [he] draws from and contributes to a range of linguistics and applied linguistics traditions, theories, and methodologies. In 2019, Dr. Mahboob was named as Australia’s Research Field Leader: English Language and Literature in The Australian’s Research magazine. ~ Biography and photo taken from the University of Sydney website.

In January I was introduced to Dr. Ahmar Mahboob by Dr. Robert Griffin, who is the English Language Learning specialist in the Naugle CommLab and an instructor at Georgia Tech.  Because Dr. Mahboob is an expert on linguistics and World Englishes, I knew I wanted to interview him and was grateful when he agreed. This interview was conducted via WebEx and Zoom sessions, as Dr. Mahboob is currently living in Queensland, Australia. He has been living a nomadic lifestyle for around two years now, staying at free campsites for a week at a time and then moving on to the next. He says his nomadism gives him a chance to engage with everyday people in one-on-one conversations and interactions as he experiences dialects and literacies in ways he could not have otherwise, while still being able to teach remotely for the University of Sydney. Such interactions inform his research on World Englishes and linguistics.

In the interview, one of Dr. Mahboob’s primary topics involved his definitions of language and literacy, some of which, he said, can be found in his book chapter “World Englishes, Social Disharmonisation, and Environmental Destruction” in The Routledge Handbook of World Englishes (ed. Andy Kirkpatrick, 2020). I have supplied the definition as found in that chapter below.

Dr. Mahboob was already publishing about linguistics and NNEST (Non-native English-speaking teachers) as a graduate student when he became interested in the broader and more abstract question of “What is language?” He remembers reading an article from January 1950 in which he read something to effect of, “It is not the job of the sociologist to define society; in the same manner, it is not the job of the linguist to define language.” (Dr. Mahboob’s paraphrase) To Dr. Mahboob, it is an absurd claim to say that scholars are not responsible for defining the characteristics and parameters of the field they work in, and it helped him begin to see the field of linguistics from a new critical perspective. One problem is that so often the scholars who do define the concept of language tend to define it in a way that is “anthropocentric” and “circular.” As Dr. Mahboob has said elsewhere, “English grammar slants the world in a way where humans are superior to all other living and non-living things,” and our definitions of language are constrained by these hierarchies. Humans have language, he says, while other species only have “communication.” Dr. Mahboob argues that we need to think more broadly than that. We have to think of human beings and their languages existing within a pattern that stretches even across species.

During the interview, Dr. Mahboob referenced a poem he wrote, which he later shared, called “Can You Think Like a Duck?” 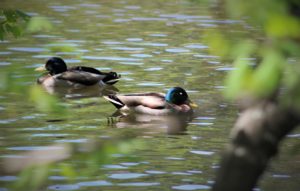 “From a distance they all look the same

But when you come closer, you can tell the difference:

Some have spots over there,

and others here,” as he pointed to a spot on his face.

“Do they have names for each other?”

“Why are some swimming this way

and others the other…

Look, this one was coming here

and now she is going there.

Dodo here, he was with that group here;

And Didi over there, with the others…

And now the two are together over there.

I can’t either, my son, let me ask if others can:

The poem touches on multiple ideas that Dr. Mahboob espouses about how we characterize and use language, including his argument that “language is science” or in other words, that language is a means of “classification and categorisation.” The questions, “Do they have names for each other?” and “I wonder how I can know if it’s a he or a she?” are essentially re-examining that aspect of language that allows human beings to impose labels on organisms and objects in the natural world by asking whether ducks have the ability to “classify and categorise” themselves. The answer is clear: We cannot know because we do not know what it is like to be a duck; therefore, any assumptions we hold about the duck is at its foundation speculative. Yet, when we talk about “who” and “what” (there it is, that dehumanizing grammatical “slant”) is capable of language, we make all kinds of assumptions in order to create these binaries of human and non-human, and we take it upon ourselves to impose our own categories, to label and name, which is in a sense a manner of colonization.

Dr. Mahboob shared a story he heard from a friend of his who lives “off-grid.” This friend lives disconnected from city power and water on 25 acres in a kind of “experiment in cohabitation with nature.” Dr. Mahboob talked about how his friend encountered bush rats on his property and used this as an analogy for World Englishes. The bush rats were really there first, so by moving there his friend had become a kind of intruder or colonizer of their physical space. He did not wish to kill the rats, but he could not have them getting into his food supply, so, in an attempt to be humane, he tried to catch the rats and release them into the wild a few kilometers from their home. A few seconds after he released one rat, an eagle swooped down and carried off the rat. His friend thought he was doing the moral thing by the rat but instead facilitated its demise because he did not understand enough about the rat to do what was best for it. Dr. Mahboob compared this story to the way languages work. When you take a rat out of its territory, it cannot function anymore; it cannot survive. It becomes disoriented and confused because its semiotic system (comprised of sensory information) is inextricably linked to its geographical environment. Humans experience a similar thing. Our languages, our socio-semiotic systems, are connected to our immediate geographical environment or a particular “geographical range.” When that environment is disturbed or destroyed or the people in that environment experience displacement, their language and culture are greatly affected. In many places, English has functioned as just such a disturbing or displacing influence, like a cuckoo bird that lays its eggs in other birds’ nests.

Some might argue that the existence of World Englishes functions as evidence of English’s ongoing evolution, and while that is true, Dr. Mahboob argues that it is also evidence of colonization and exploitation, both of which harm the lives, traditions, and languages of indigenous peoples. Dr. Mahboob says that linguistics as a discipline has become divorced from the needs of actual people in the real world. There is no point in writing grants and receiving funding and publishing papers, he says, if “it isn’t helping anybody.” In other words, he believes that linguistic knowledge should be put to work in the service of the communities of practice from which that knowledge originally derives. Scholars need to be thinking more about how language affects the lives of real people in everyday life, as Dr. Mahboob explains in an interview he did with Susan Wyndham in June 2020. If linguistics is going to make a difference in the world, linguists need to alter their mindsets, re-examine their assumptions about language and literacy that undergird the foundations of their discipline, and reform the processes and systems of “knowledge production.”

Click here to listen to the rest of our interview.

Note: Dr. Mahboob recently did another interview with Dr. Jessica Ashe, CEO of Global Mobility, in which he addressed topics related to the ones he and I discussed. You can also follow him on Twitter.