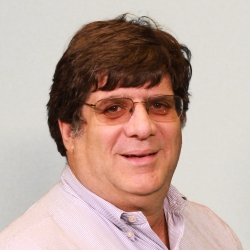 Dr. Robert Griffin is the English Language Learning (ELL) Specialist at Georgia Tech’s Naugle Communication Center (“CommLab”). He also teaches classes on communication for the School of Literature, Media, and Communication. He received his Ph.D. in Linguistics from Indiana University—Bloomington, and his research focuses on Second Language Acquisition, Phonology, and Pragmatics. As a CommLab ELL specialist, Rob works regularly with our ELL and international students on English language grammar, pragmatics, and pronunciation, and also co-runs the CommLab’s English Conversation Hour and English Conversation Partner programs.

I sat down with Rob in Fall 2020 to discuss his work at the CommLab and learn in detail how he helps students as our English Language Learning Specialist. In what follows, we discuss his background; his inspiration for pursuing his current career; the ways that he supports ELL students at the CommLab; the tips that he has for other teachers working with ELL students; and what he loves most about working with Georgia Tech students.

At the beginning of our conversation, we discovered a shared inspiration for our work not only in the CommLab but with English Language Learners specifically. I myself became interested in working with English Language Learners because of my own time studying Japanese and studying abroad—and later living in—Japan. Likewise, Rob’s first inspiration for this career path was when he was a language learner himself. Specifically, after studying German for a few years in high school, Rob studied abroad in the German-speaking, Alpine region of Switzerland, where he stayed with a host family for a year. Recounting this experience, Rob recalls initially struggling with culture shock and language barriers. As he explains it,

Reflecting on this time now, Rob points to the ways that his first-hand experience of language and cultural barriers broadened his awareness of the importance of language acquisition more generally, eventually leading him to study linguistics:

You can see more of this part of our conversation here:

Next, I asked Rob if he could talk in more detail about one of his sub-specializations within the field of linguistics: phonology. As Rob explains it,

In terms of how phonology can help language learners, Rob explains:

Rob and I then dug into some of the specifics of phonology. We discussed, for example, the difference in pronunciation—and more specifically, in tongue placement—when pronouncing a hard Midwestern “R,” as in the word “far” or “her” (this is known as a “dark R” in linguistics, Rob tells me), versus the Japanese sound that in English gets transcribed as an “R,” as in the Japanese syllabic sounds “ra-ri-ru-re-ro” (ら・り・る・れ・ろ). In the Midwestern English “R,” Rob points out, your tongue curls up towards the back of your mouth; in the Japanese “R,” however, the tip of your tongue actually hits the roof of your mouth a bit. As Rob points out, as native speakers of any language, we do not necessarily think about where are tongues are when we are speaking—that’s why meeting with specialists with backgrounds in phonology can be so helpful for language learners.

When I asked Rob about his typical work in any given week at the CommLab, he explained that he’s helped students with a broad range of skillsets and modes of communication, whether written projects, mock interviews, or general pronunciation practice. Sometimes, as he points out, it goes beyond just pronunciation or grammar—recently arrived international students, for example, sometimes want help with cultural pragmatics and also need assistance learning academic meta language. But in particular, he has seen an emphasis on phonology help many students. As he explains, in late Fall 2019,

Overall, Rob says, he would describe his average day working in the CommLab as “diverse” in terms of the many ways he helps students. He also notes the special role that consultants can play in helping international students, which extends beyond issues of language acquisition. As he points out, some students are struggling with culture shock, homesickness, and, during the COVID crisis, isolation, and, in one-on-one appointments, students may sometimes open up about these struggles in a way that they might not to their classroom teachers. As he explains,

This led us to further discuss the myriad ways that the CommLab helps students, particularly through our English Conversation Hour program. Initially begun as an in-person event, we had to pivot, as with so many things, in the wake of the COVID-19 pandemic in Spring 2020; the program has grown in popularity, however, despite remote learning, and we roughly doubled our previous, in-person average for participation (10–15 people) with the October 2020, online version of the event (29 people). As we discuss in the following clip, we were determined to continue an online version of Conversation Hour, as language-learning can play such a fundamental role for one’s overall well-being, as can, of course, a sense of community:

During the course of our conversation, we also discussed how much goes on behind the scenes in Writing Centers and other support services that the campus-wide community and faculty don’t always know about. While there is sometimes the assumption that Writing Centers are a sort of “one stop fix-it shop,” or even an editorial service, as Rob notes, “for those of us in CommLabs and support units, we have a really challenging job because you have to wear a variety of hats.” In addition, he points out that it’s really about tailoring our help to each student—international students and domestic students sometimes may need different types of help, for example—and about ensuring that we can give them “the tools to help themselves.”

While Rob and I talked a great deal about the ways in which he helps students in his own CommLab consultations, he also had some advice to share with teachers who may be working with both English Language Learners and international students. Primarily, he advises easing students in to new cultural situations, and helping them build confidence by beginning discussions/tasks in pairs or small groups on low-stake activities before moving onto bigger projects or whole-class discussions. Essentially, he recommends scaffolding and flexibility as key for working in an ELL classroom, as you can see in the following clip:

Reflecting on his time at the CommLab thus far, while Rob’s career has spanned multiple institutions, he says that there’s something special about Georgia Tech. When I asked him about his favorite part about working with Georgia Tech English Language Learners and international students, he immediately responded,

I could not agree more. As Rob and I discussed, the CommLab affords us, as teachers and consultants, the incredible opportunity to get to know students on a personal level, and to share with them their hopes and ambitions. In the case of our English Language Learner students, it means not only working on things like grammar, pronunciation, and syntax, but also things like cultural awareness—both for our students, and for ourselves—and purposefully building a positive campus community. I, for one, am grateful for the many ways that Rob does this personally in his every day work with our ELL students, and thank him for his generosity with his time in sitting for this interview with me, and in sharing his experiences and advice.