The other day I sat down at a table at work and, looking up, found someone had written a several poetic lines on a whiteboard near the window: 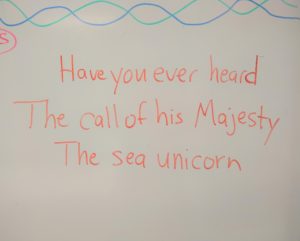 Based on everything I have know about English syntax, I would argue it was supposed to be a question, despite the deceptive absence of the appropriate punctuation mark. I can say the following with some certainty:

While working as a literary magazine editor, I saw haiku submissions all the time. We rarely published any. Most failed to advance past the poetry editors. These haiku were rigidly manacled to convention, at the cost of sense or music, struggling to transcend the form. They also have to deal with the stigma of accessibility and being “pop poetry,” which is always a point against a piece.

The only haiku that ever made it into the magazine actually consisted of a clutch of six haiku, called collectively “Haiku in Idaho.” They were submitted by a graduate student from Ireland, Séamus Ó Súilleabháin, who wrote them in Irish, translated them into English, and enlisted the help of a colleague from Japan, Junichi Ito, to translate them into Japanese. They looked beautiful on the page.

Among the many poets who have taken up the haiku form, Matsuo Bashō, for many people, stands as the quintessential haiku artist. His poems, “The Old Pond” and others, are what we think of when the word haiku is mentioned.

A frog jumps in:

Now, centuries removed from Bashō, the tradition of composing haiku continues, as evidenced by Jack Kerouac’s American Haiku and contemporary literary magazines like Acorn and Frogpond. I recently discovered a beaut by Kent Foreman, performed on Def Poetry Jam. The title is “Epiphany”:

The prolific haiku tradition, I would add, has also produced greeting cards and those anonymous haiku memes about refrigerators, which float through social media like paper lanterns.

But sometimes they don’t make sense

Jeff Bond, a friend of mine from graduate school, has an annual February tradition of writing a daily haiku on social media. Here is a recent composition of about ice quakes, written February 2 of this year:

There is no one reason why the haiku tradition lives on in elite, popular, and folk culture, but I know what my reasons are for teaching haiku in my composition courses. Many are the potential benefits writing haiku can provide my students, whether through a full-fledged assignment or an in-class activity…or both. (Note: I say “both” because one could easily have a haiku day in which, rather than remain in their desks, students wander around campus or residence composing haikus, 1-2 of which they will then use as inspiration for a full-blown personal essay or other writing assignment.) Narrow focus, concision, careful diction, attention to detail: these are all conventions we associate with haiku. They are all principles of written communication I would like my students to transfer into their tool kits of composing.

The following linked sections describe experiences I have had with teaching haiku in first-year composition courses.