It’s the smell of candy out in the air; it’s refreshing across the tip of the nose.

Cicadas and cricket chirps alternately arrive with the midnight wind, as if they are always in a shiver after the cool breeze, but do not need long for them to feel renewed.

The lamps shine like pearls from the top of tall electric poles, illuminating the restless creatures below, throwing their monotonous murmurs into the warm gray sky. I pull down the rusted iron switch on the wooden pole, creaking, creaking.

I walk to the center of the yard. 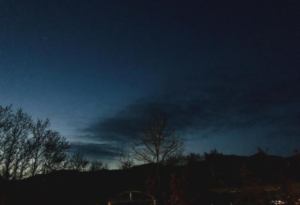 It is my grandparents’ home in the countryside: I can feel the smell of hawthorn and chestnut trees in the air, the color of the drifting mountains, the echo of the river, and the tricycle with its lights on occasionally bumping up and down the rough path. It is only here that one can look up into the universe.

I close my eyes for a while, and in a while, open them.

I see the sky, picturing it with my imagination in a way that human words cannot describe. When you look into the darkest part of the night sky, the darkness, the light your pupils can’t recognize, there are still infinite stars, and beyond that, infinity.

I adjust my camera: tripod height, screw knob angle, handle position; shutter speed, exposure time, sensitivity to light. I focus the lens on the stars, to the end of the universe. 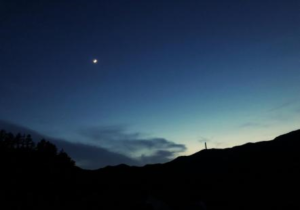 I turn my eyes back to the sky.

I can’t remember when the night sky became my partner, and I can’t trace back from which moment the camera and I became inseparable. I look at the night sky: they are like talking pixels, telling me something, in my memory, stacking, accumulating, like a slowly loading picture on the computer screen.

I see the stars on the east painted the shape of a mountain, the cliff wall by the sea where my father and I went most often: at the end of the city, where the sea and sky began to stretch, we watched the sunrise and sunset, the sculpting of the rocks by the waves, the ebb and flow of the tides. 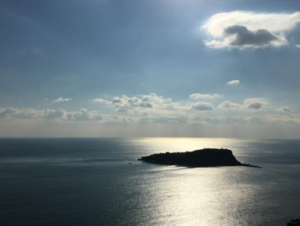 Have you ever carefully listened to the sound of the sea? It always brings us surprises. On the semi-circular white sand beach, the waves come up again and again, leaving a thin layer of pearl white, pieces of triangles with bubble lace.

The vastness of the sky, of the sea, appear in our memory every week. Like a pious pilgrimage, every week, we are there, to look far, look up, to admire nature and the sky. 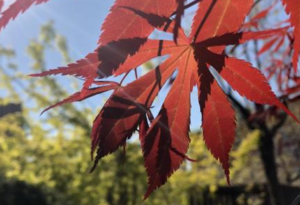 “Name 30 plants for an ice cream. Sounds good?” My father set the rules. Deal! “Winding and rough limb… Jujube tree!” One point. “Chubby frog’s flipper… Sycamore tree, for sure!” Two points. “Winter jasmine, welcome to spring!” “Nope, this is forsythia with four petals, whereas jasmine has six,” Father corrected me. I learned all these tidbits about nature from my father, an encyclopedia, during our twelve years of weekly traveling. The world is interesting. My father taught me this, let me always have more enthusiasm to observe, to appreciate the hidden beauty of the world. 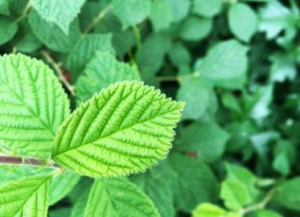 During all these trips, Father and I have made all kinds of collections. We have a pamphlet, diaries, cicada sloughs in spring, specimens of autumn leaves, but the predominant records come from our photos. Father has had the habit of recording life from the moment I was born: we have an old black and white camera from more than a decade ago, a VCR that needed a change of film, a huge portable hard drive, a CD that needed to be recorded on DVDs; I can hear those images and videos talking to me about the stories that I don’t even remember. Photos are part of my family, and they just naturally have become part of my life.

I began to pick up the camera and formed my own views on photography.

My favorite time is when I go out with my dad. 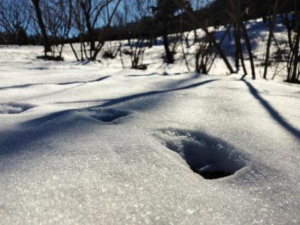 On a snowy winter morning, with a woolly hat and ski gloves that had not been turned out in a year, we tucked ourselves into bulging balls against the biting cold of the north, but we still went out with our cameras.

On the wooden poles of the fence stood snowhenge lookers, competing to see who could stay longer and see farther; acting like an animal, a melted dome, an artwork signed by a puppy’s claw.

Early autumn, the morning temperature was just right for crystal dew; they were water elves, refract, magnify, scatter, reflecting my shadow, and the carved world in the crystal ball.

The magical tension makes you feel that they are alive, gently shaking, tottering. 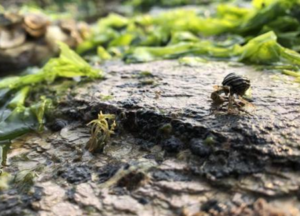 There was also the sky, the gathering, the winding. Its cooperation with the sun is always delicately perfect: the paint of the sun is randomly sprinkled to every corner, rendering and foiling, light and shadow, on the earth, in the sky, always letting me look up.

For four seasons, from sunrise to sunset, my camera and I, together, witnessed the change of the world. My photos are talking pixels, they tell me stories behind the “click.” 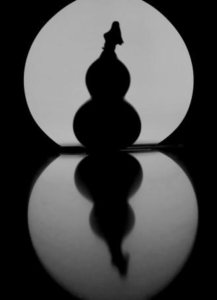 Closer and closer, my lens and eyes became more focused and obsessed with small things. In my eyes, tiny itself is the universe on the other side of the world.

As things dwindled, I began to pursue the expression of color: I turned the saturation up until the image was almost pixelated; I used filters to adjust the brightness of the image, bright as explosion or dark as a black hole, but they did highlight things that could not be seen in the original image.

They were glorious and splendid, intense and complex. 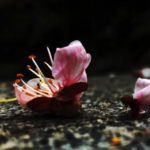 I believed in this for a long time. Until I saw something: my grandfather’s paintings. 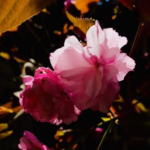 Grandpa used a little bamboo stick to stir the black ink; it devoured the transparent water quickly. He picked up a charcoal pen, wrapped it, and smoothed the rice paper. Focused. Following his line of sight, we observed a cluster of grapes: their obvious black spots, the light reflected on them.

Everything was simple: a quiet room, a self-made simple brush, a piece of felt cloth covered with ink marks, and a folding table set up by my grandfather himself. I heard Grandpa holding his breath, depicting grapes, the grating of his charcoal pen, and the sound of the ink rendering into the paper. Patiently feel in the study room: the smell, the sweetness leaped up from the sketch.

Beauty in my grandfather’s Chinese paintings has nothing to do with colors, but with contrast, with complexity. He just used black and white. But it is these two simple colors, even a few simple strokes on the scroll and a large amount of white space, that give the paintings infinite imagination: not superficial, but profound beauty. 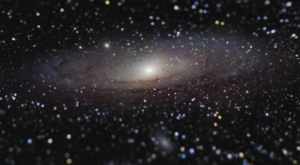 Black and white: it let me think of the sky in front of me again.

The shutter closed with a soft click. The screen flickered for a second, and started to process. I turned to deep space again. 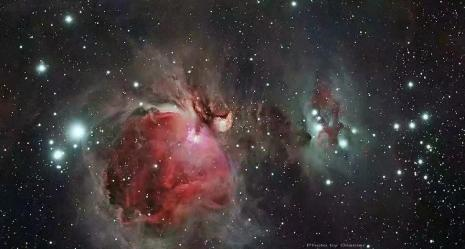 I remembered the first time when I saw deep space photography. They tend to extract colors from darkness: unsaturated, sporadic, dotted sparkles. But they impressed me, let me feel the power of the universe. In the face of the universe, I always see it telling its complexity in the simplest colors and ways, merging  history and vast darkness. Because of its calm and its simplicity, it turns to be more mysterious, more noble. Simple and pure are also indescribably colorful.

I asked myself, what is a good photograph?

Like standing under the dazzling stars, we all see our own imaginations, unique interpretations. The stars, in our eyes, might be the same and trivial, but in fact they all have their different orbits, colors, and histories; they don’t exist for us; someone will see them because what we value is the story behind them, the power of life and the mysteries of the stars. No matter what color they have, they are and will always be glorious.

I want my photos to be like these stars. They have values because I can see the stories behind them. Perhaps color is not the best expression. The parameters added only satisfy the surface gloss, but what really has the power and temperature is still their story and emotion. Even without any embellishment, the most precious expression will still pass on the affection simply through eyes, through the talking pixels: someone will hear their whispering; someone will see the color.

The early autumn wind still blows, and the willows at the door are stirring sparsely. There is another bugle of summer insects, and even a distant squeal of pheasants. A  crabapple drops to the ground; a thud. The cabbages rising from the patch and the corn about to be harvested are swaying, undulating, a wandering shadow.

The screen of my camera lights up: a picture of the universe. 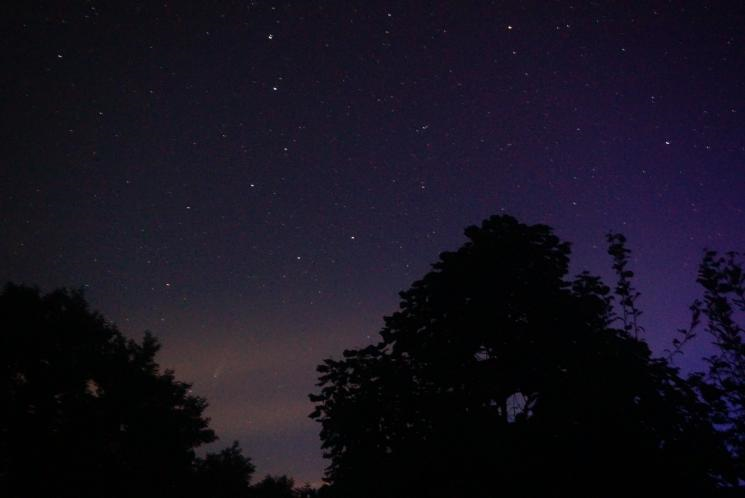 From the darkness, I see colors at the end of the horizon, simple but beautiful. The fallen sunset at the end of the sky is the color of the aurora. There is a comet that I have been looking forward to for a month, and it finally shows up on my screen, the NEOWISE. In front are the shadows of the trees, deep silhouettes. Looking up, the Big Dipper pointing to the North Pole, opposite W-shaped Cassiopeia across the shore. This is a quiet freeze, each pixel in quiet appreciation of each other, drunk, peaceful. This is exactly the feeling and strength I want, for my photo and my life.

My pixels are talking.

This time they tell a late–night bedtime story, warm and simple. They end with the following: “Peace, serenity, and good night.” 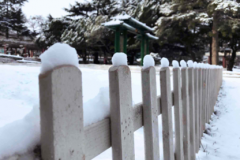 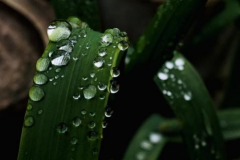 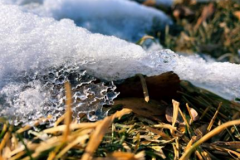 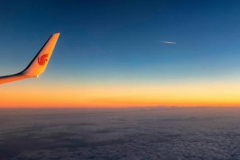 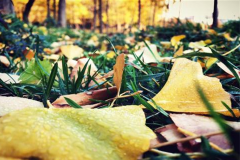 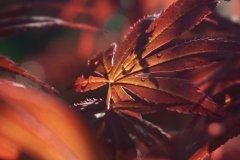 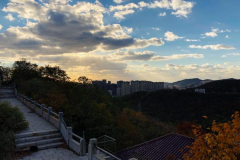 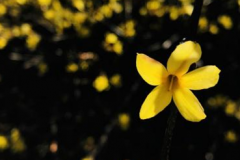 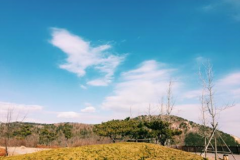